Black-tailed Jackrabbits are year- round residents in Sabino Canyon. They are recognizable by their large size and black-tipped tail and ears.

When predators approach they freeze then dash away leaping in large bounds at speeds up to 35mph. They are able to stay cool by releasing excess heat from their oversized ears. These provide a surface area of exposed skin loaded with blood vessels. When the surrounding air temperature is slightly below the rabbit’s body temperature, the blood vessels in the outer part of it’s ears widen in a process called vasodilation. This results in greater circulation of warm blood from the body’s core to the jackrabbit’s ears, where heat is lost to the cooler surrounding air. When it is hot, a bright pink glow from the expanded blood vessels makes their ears look even more impressive.

Their common name refers to the black stripe that runs along the top of the tail onto the rump. Despite the “rabbit” on their name, members of this genus are technically hares. The young are born fully furred with eyes open. They are well camouflaged and are mobile within minutes of birth. The female hares do not build a nest, they give birth in a shallow depression usually lined with fur. The youngsters begin foraging for themselves within two weeks.

In order to survive in desert habitat, Black-tailed Jackrabbits eat the most succulent food available, foraging in the cool of the early evening and night and dozing in a shallow depression in the shade of low vegetation by day. Their diet is composed of shrubs, small trees, grasses and cactus fruit. I have observed them standing on their hind legs while eating fruits off the top of a barrel cactus in lower Sabino.

Black-tailed Jackrabbits are important prey species for many raptors including Red-tailed Hawks, Great Horned Owls and Golden Eagles.  They are also prey for carnivorous mammals such as coyotes, bobcats and foxes. Rattlesnakes are also known to prey on young jackrabbits.

Black-tailed Jackrabbits do not migrate or hibernate during winter, they use the same habitat year-round. Two peak breeding seasons occur in S/E Arizona, during the winter rains (Jan-March) and again during the monsoon season (July-August).

A good place to look for these jackrabbits in Sabino is along the Esperero trail between the Bear Canyon trail and the tram road. 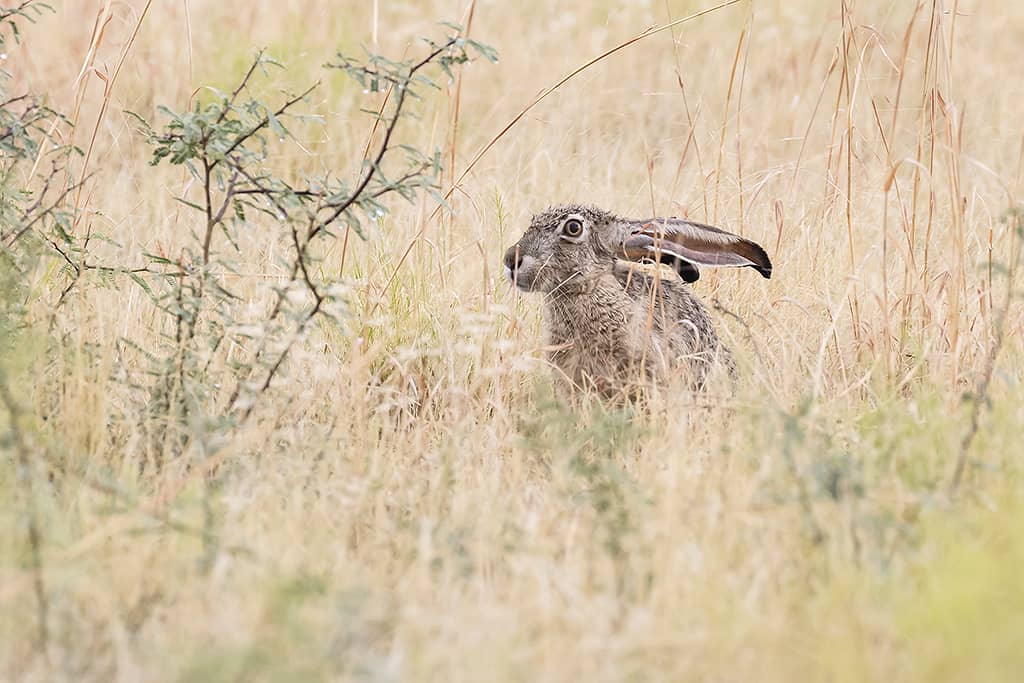