Prior to 2018, the last documented sighting at Sabino Canyon was in 2002

Only one species of trogon occurs in North America on regular basis, the Elegant Trogon. Their metallic-green and rose-red plumages, as well as their unusual stout bodies and square-tailed profile makes them easy to identify. Their repetitive and resonating calls are easily recognized as well. They are usually found in riparian habitats. In Arizona they forage among oaks, sycamores, Arizona Black Walnuts, canyon grapes and willows. Their diet consists primarily of insects and fruits.

Elegant Trogons are “secondary cavity nesters.” They put their nests in existing cavities in trees that have been excavated by woodpeckers, primarily Acorn Woodpeckers and Northern Flickers. Once the woodpeckers have moved on, trogons, among many secondary cavity nesting species, can move in. They breed regularly in only 4 mountain ranges in Arizona: the Atascosas, Chiricahuas, Huachucas and Santa Ritas. Some of the Elegant Trogons are year-round residents, but most arrive in April and depart in November. They are most easily seen when they are chasing flying insects. The male shares reproductive duties with the female including sitting on the 3 or 4 white eggs and caring for the young. 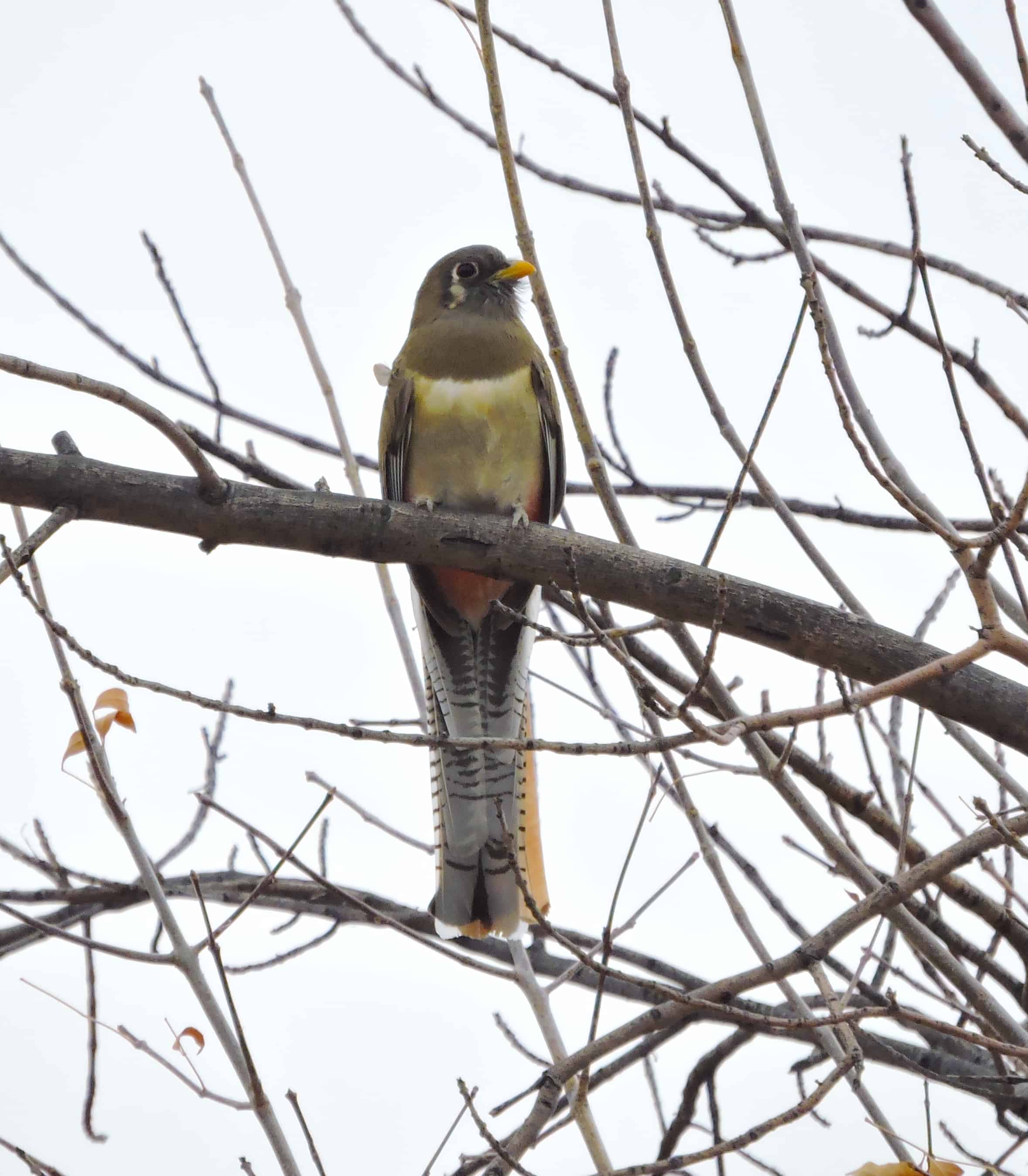 Elegant Trogons are 12.5 inches long, with a wingspan of 16 inches and a weight of approximately 2.5 oz. They are often seen perching upright with their long narrow tail hanging nearly straight down. Adult males have a black face and throat, iridescent green upperparts, red belly and undertail coverts. Adult females have a similar pattern but head and upperparts are graying brown, lacking black or green. Their underparts are a paler red than those of the adult males. Both males and females have round heads with large eyes and short, stout yellow bills. The woodpecker-like flight of this species is generally slow and heavily undulating but individuals can escape from danger with amazing maneuverability and speed. Adults defend their young from snakes, squirrels and hawks, but human disturbance can cause abandonment of nests, eggs, and young.