Fifteen species of pepsis wasps (aka tarantula hawks) are found in the
U.S., mostly in the southwest. Several species occur in the Sonoran
Desert. Tarantula hawks are easily recognized by their robust, iridescent
blue-black bodies and (usually) shinny orange wings. In some of the
species the wings may be blue-black instead of orange. Tarantula hawks
range in body length from about half an inch to over two inches, with
males considerably smaller than females. The females have curled
antennae that distinguish them from the males. It is quite easy to identify
an insect as a pepsis wasp but it is very difficult to distinguish the
different species in the field.
These wasps are most easily seen around blossoms during the
summer. Both male and female pepsis wasps drink nectar from flowers.
I have seen them many times in my back yard, especially on Milkweeds.
During the summer months, once the female tarantula hawk has
mated she searches the ground for tarantulas. She needs to capture a
tarantula for each egg she will lay. This can be a challenge because
tarantula hawks are diurnal and tarantulas are nocturnal. The female
wasps go into a searching mode running wildly over the ground using
their eyes and sense of smell to locate a tarantula. Sometimes they locate
a burrow of a tarantula. Tarantulas close off their burrow with silk
strands and the wasps will vibrate the silk strands to fool the tarantula
into coming out expecting prey at the entrance. When the tarantula
emerges from the burrow, the wasp will provoke the spider by prodding
it with her antennae. If the tarantula rears up on it’s legs, the wasp will
deliver a sting into the nerve ganglia in the underside of the spider’s
cephalothorax. She then drags the spider back to it’s burrow or another
sheltered location. She then lays a single egg on the paralyzed, but still
alive, tarantula. The pepsis wasp egg hatches in 3-4 days, and the newly
emerged larva feeds on the still alive tarantula. It molts through several
instars before pupating. Pupation lasts 2-3 weeks, after which the new
adult tarantula hawk emerges.

I learned this fascinating life cycle story during my naturalist training
in 2005. For 13 years I always carried a camera during my visits to the
canyon. Finally on August 29 th of this year I was walking down the Bear
Canyon trail when I noticed a tourist taking a photo with his cell phone.
I walked over and soon saw a tarantula and a nearby tarantula hawk. I
was thrilled to finally capture images of this behavior. 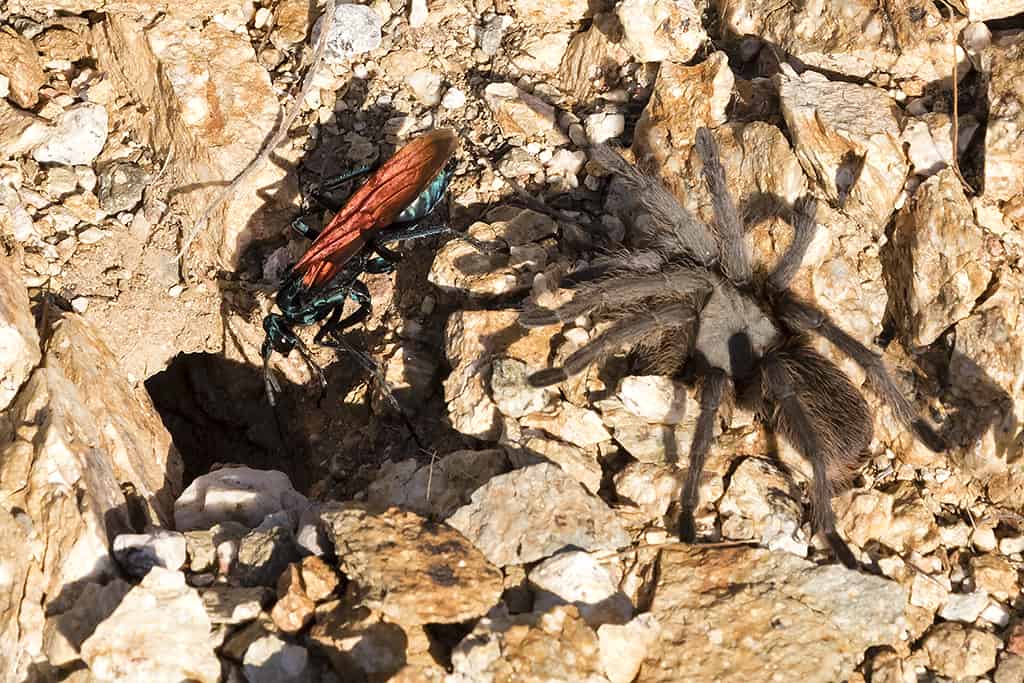