Whitetails are rich reddish brown in summer and gray-brown in winter.

When I started my training to become a naturalist, I learned that Mule Deer inhabit the lower foothills and brushy canyons of the Sonoran desert, and the White-tailed Deer live at the higher elevations in the mountains. Armed with this knowledge I believed that the deer I was seeing at Sabino were Mule Deer. Twelve years later I now believe that every deer I have encountered at Sabino has been a small subspecies of the White-tailed Deer known as Coues White-tailed Deer. Other trusted observers report once having seen a single Mule Deer on the Esperero trail.

Small and graceful, the whitetail takes it’s name from its long, broad tail, which is brown above and white below. When alarmed, they bound away in leaps with their hind legs hitting the ground before their front legs, and their tails held high, displaying the white underside of the tail. 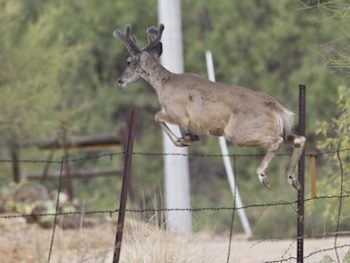 This behavior is called “Flagging” and serves to warn the other deer of danger. It is a good way to be positive that you are watching a white-tailed deer. Summer males develop antlers that consist of a main beam that curves sharply forward with individual tines rising vertically from it. Mature bucks generally have three to four tines per side. A vascular skin called “velvet” initially covers the antlers. As the antlers mature, the velvet is sloughed off exposing the bony antler. Whitetail bucks grow antlers in the summer and usually shed their antlers in the spring after mating season.

Whitetails are rich reddish brown in summer and gray-brown in winter. They are primarily browsers but vary their diet of leaves and twigs with grasses, herbs and acorns. White-tailed Deer breed in early winter with the spotted fawns born in the summer. Mule deer are common in the Catalina Foothills and Agua Caliente Park. They are stockier with huge ears and a shorter white tail with a black tip and evenly bifurcated branched antlers. Mule Deer run with a distinctive, stiff-legged gait in which all four feet leave the ground and land in unison.

I would like to thank Mark Hengesbaugh, Bill Kaufman and Fred Heath for sharing their observations with the author.