Gopher snakes are Arizona’s longest snakes. They have been reported up to 92 inches (7.66 feet) long but 4 feet is more common. Usually they are tan or cream colored, strongly marked with a row of black-edged brown blotches on the back and more numerous smaller but similar blotches on the sides. On the tail these markings become a clean pattern of dark bands on a plain background. Their bellies are usually white. They have heavily keeled dorsal scales and a narrow head that is slightly wider than their neck.

Gopher snakes are found throughout the Recreation area in Sabino Canyon in a variety of habitats. They can be active both day and night when conditions are favorable. They are primarily ground dwelling but are good climbers and are sometimes seen in trees. They hibernate during the cold months. Mating takes place in the spring and a clutch of up to 24 eggs is laid in late spring or early summer. Hatchlings begin to emerge in September.

When disturbed, gopher snakes will rise to a striking position, flatten their head into a triangular shape, hiss loudly and shake their tail at the intruder. These behaviors, along with its body markings, frequently cause them to be mistaken for a rattlesnake. The tapered tail, the absence of a rattle and round pupils all distinguish a gopher snake from a rattlesnake.

Gopher snakes are powerful constrictors, killing their prey by suffocating them in body coils or by pressing the animal against the walls of their underground burrows. They consume primarily small mammals although birds, their eggs and their nestlings are also eaten. 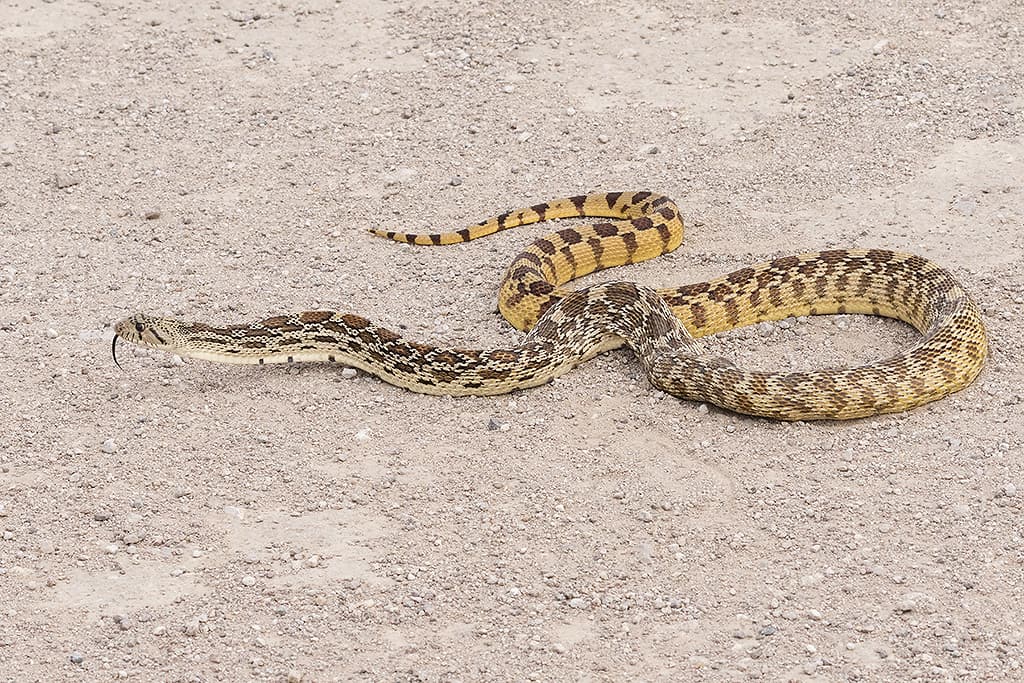